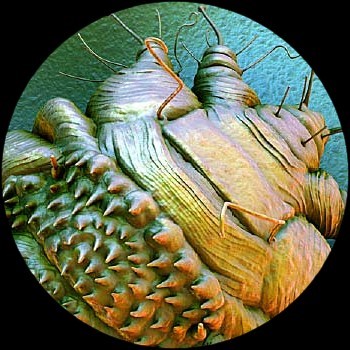 In her book, The Cure for all diseases, Dr Clark makes many references to the role that parasites play in the generation of disease. She claims that because of the solvent exposure we have in the 21st century and more specifically in the past 50 years, we now have what she calls a “new generation of disease”. She calls this “fluke disease” and documents the correlation between the unprecedented migration and replication of flukes in the system with a number of “new diseases” notably cancer, AIDS, endometriosis, Lupus, Hodgkin’s, Alzheimer’s, Diabetes, Seizures, Migraines, Depression etc.

Dr Clark defines a parasite as “anything that lives off you and gives nothing back” and so this embraces not only large organisms but also countless varieties of organisms from bacteria, to viruses, Rikettsia, amoeba, fungi and worms including round worms and flat worms. Using her syncrometer testing technology she documented the correlation between various diseases and the presence of pathogens and toxins in the system. Initially she could not explain why she kept finding parasites in the wrong places and breeding in the wrong way until she made the connection to the presence of solvents in the system. Solvents are chemicals that dissolve things and we have started to use them in countless applications in industry. We use them now for example to extract oils for cooking oils. We use them to extract essential oils. We use them to extract oils from cereals to prolong shelf life. We then use these solvent polluted oils to make countless products from margarines to biscuits to fried foods to soaps and cleaning products. We also get significant amounts of solvent exposure from the generalised use of so called white oils which are by-products of the petroleum industry and they form the basis of many cosmetic products on the market. Solvents are also used in cleaners and disinfectants which then indirectly make their way into many products through the manufacturing process. We use them to extract the water from the alcohol used for aerosol propellants.

We have ongoing and daily exposure to a variety of solvents in our every day lives. What Dr Clark’s research reveals is that these solvents do in the body what they do…they dissolve things. The consequence of this is potentially disastrous. The mucous membranes that make up the gut lining, the blood brain barrier etc can be compromised and become too porous allowing toxins and parasites to migrate and move in ways that they should not be able to do. This constitutes an immune problem and sets the stage for disease. Solvents also, according to Dr Clark, can dissolve the tough outer coating of parasite eggs allowing them to hatch in unprecedented ways, so not only are parasites hatching and breeding in unexpected ways but also moving around the body and setting up residence in places we would not expect traditionally to find them.

So with this in mind Dr Clark advises 4 basic jobs:  that we take measures to rid ourselves of these potentially destructive invaders: And that we pay more attention to where we may be getting exposure to these organisms in the first place: we take measures to clear the toxins we have had exposure to out of the body and fix any damage they may have done: and finally we learn where we have been exposing ourselves to these toxins and learn how not to put them back!!

“Flatworms, roundworms, protozoa, even bacteria and viruses are remarkably easy to kill using a combination of zapping and this herbal program. Thus it is not just for cancer, but a general treatment that can benefit almost every illness.” Pg. 338

“I believe the main source of the intestinal fluke is undercooked meat. After we are infected with it in this way, we can give it to each other through blood, saliva, semen, nursing, and childbearing. Family members nearly always have the same parasites. If one person develops cancer or HIV, the others probably have the intestinal fluke also. These diseases are caused by the same parasite. They should give themselves the same de-parasitizing program.” Pg. 342.

Rather than relying simply on the parasite program however, it is preferable, and kinder to your body, to search diligently for the sources of your infection and re-infection and to try to avoid them as much as possible. Some measures include:-

Observing stricter hygiene practices particularly regarding the sterilizing of your hands after toilet use and before food preparation and eating;

Keep your hands out of your mouth.

Improve food preparation habits including the avoidance of all undercooked meat and unsterile dairy products as well as the use of HCL 5% as a vegetable soaking agent. (See Herba Farmacy- Natural Healings “food rules”)

Put your pets on the pet parasite herbs. This uses the same herbs we use for people only it is in powder form and is used on the animal’s food
daily. Repeat 6 monthly

Children’s parasite Cleanse is an easy to apply tincture form and repeated every 6 months.

Adults Herbal Parasite Cleanse should also be repeated every 6 months